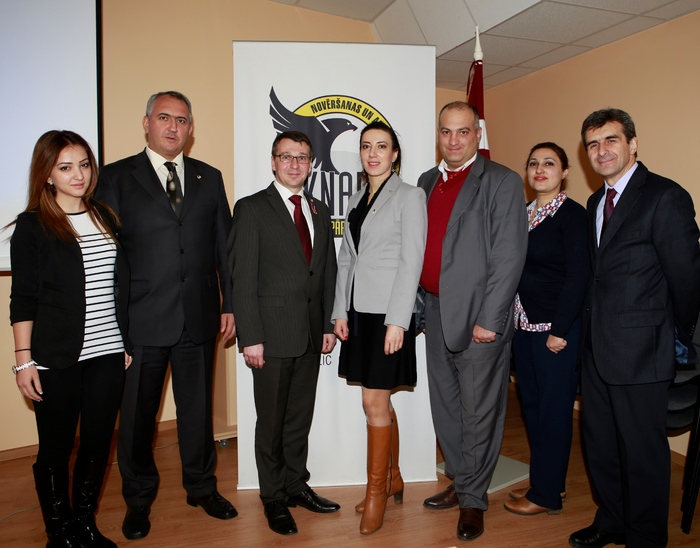 Within the Second Public Sector Modernization Project for Armenia, the Commission on Ethics of High-Ranking Officials of Armenia made a visit to Lithuania and Latvia from November 16-21, 2014 to study the corruption prevention system of Lithuania and Latvia, regulatory processes related to asset and conflict of interest declarations, ethics rules and conflict of interest, their enforcement.
The Armenian delegation included Siranush Sahakyan, the Chairperson of the Commission on Ethics of High-Ranking Officials of Armenia, Commissioners Lilit Petrosyan, Armen Khudaverdyan and Artak Sargsyan, as well as Aharon Mkrtchyan, the head of the Second Public Sector Modernization Project for Armenia and Lilia Shushanyan, Chief Secretary of the Prime Minister of Armenia.
The Armenian Delegation had meetings and discussions with the representatives of Chief Official Ethics Commission of Lithuania, Special Investigation Service, State Tax Inspectorate and Ethics Commission of Vilnius City Municipality and Transparency International Anti-corruption center.
Chief of Staff and the members of the Chief Official Ethics Commission (COEC) headed by the newly appointed chairperson of the Commission hosted the Armenian delegation and presented them the mission and functions, asset and conflict of interest systems of the Commission.
During the meeting at the Special Investigation Service of Lithuania, the Lithuanian partners discussed the anti-corruption activities implemented by them, while the formation and decision making processes as well as practical issues related to their activities were discussed during the meeting with the members of Ethics Commission of Vilnius City Municipality.
The Armenian Delegation had also a meeting with the representatives of Transparency International non-governmental organization during which problems related to the efficiency building of civil society representatives’ involvement in fights against corruption was discussed.
During the visit to Latvia, the Armenian Delegation had a meeting with the Chairperson and other representatives of Corruption Preventing and Combating Bureau of Latvia during which Latvian corruption prevention system, conflict of interest declarations legislation, the Latvian experience of high-ranking official’s ethics promotion and ethics education issues were discussed.
The Armenian Delegation had also meetings with the representatives of State Revenue Service of Latvia who presented asset and income declaration system and the processes of verification and analysis of declaration data, issues related to the institutional cooperation with anti-corruption agencies and other issues. During the meeting with Transparency International Latvia Anti-corruption Center issues related to the activities of Latvian civil society organization representatives, cooperation with whistle-blowers in Latvia and their legal protection were discussed.
The Armenian delegation members presented their Latvian and Lithuanian colleagues the achievements and problems related to public sector ethics and conflict of interests in Armenia.