Later, the High Commissioner visited the Samuel Moorat Armenian Middle School in Sèvres. "As an Armenian, I feel great pain seeing the school in this way. There is history here, and those pages should never be turned," the High Commissioner said. A number of programs are being developed to allow the classrooms and the theater building to be used once again.

His following meeting was with the Vice-Mayor of Paris for International Cooperation, Arnaud Ngatcha. They discussed matters concerning Armenia-France relations and the Armenians living in Paris. After the official meeting, Zareh Sinanyan visited the Holy Cross Armenian Catholic Church in Paris and became acquainted with its rich history and recent renovations. The Church has a powerful presence both in the Armenian community and in the country’s daily life.

The High Commissioner ended the day by answering questions from Armenian media in France and meeting with cultural figures in the community.

On his last day in Paris, Zareh Sinanyan visited the "Dprotsaser" School in Raincy for a tour and met with the school’s director Haïg Sarkissian and teaching staff. "Schools are the foundations for the preservation of Armenian identity. I understand the difficulties you are experiencing to be able to provide a high-quality education at the school. This is a kind of heroism in its own way. From Constantinople to Marseille and having settled in the Paris suburb of Raincy since 1927, the school has never deviated from its main mission," the High Commissioner noted.

The school's management intends to develop a program for educating Armenian students in Armenian at French schools. The High Commissioner and school management agreed to finalize the program and create a roadmap for action. Our Office will continue to work with the school in this direction.

The High Commissioner was also briefed on other matters concerning the school.

More than 200 Armenian students attend "Dprotsaser" daily school. There are seven daily Armenian schools in France and house over 1,200 students.

At a meeting held at the French National Assembly, the High Commissioner met with Chairman of the France-Artsakh Friendship Circle, François Pupponi, and Chairman of the France-Armenia Friendship Group, Jacques Marilossian, where they discussed matters related to protecting the rights of Armenia and Artsakh. The High Commissioner highly appreciated the efforts of the French National Assembly in this direction and expressed hope that the international community and organizations will eventually be able to contain Azerbaijan’s ongoing aggression against Armenia and Artsakh.

The Permanent Representative of Artsakh to France Hovhannès Guévorkian was also present at the meeting.

Zareh Sinanyan expressed his admiration for the good conditions of the school and the high-quality education, as well as the preservation of Armenian culture in its halls.

Afterwards, the High Commissioner met with the CEO of BRED (French bank), Olivier Klein, where they discussed implementing programs to attract investment in Armenia.

The High Commissioner concluded his Paris visit by meeting with more than seventy community representatives. Zareh Sinanyan presented the Office’s activities in detail, then answered questions from participants. During the meeting, which lasted about three hours, there were questions regarding repatriation, attracting Diaspora potential, and introducing the Institute of Commissioners in Diaspora communities.

Then the High Commissioner met with representatives of the community’s intelligentsia, during which they discussed matters on the Armenia-Diaspora relations agenda. They decided to continue the meetings in a similar format and plan to work on developing the agenda for this year’s upcoming Armenia-Diaspora forum. 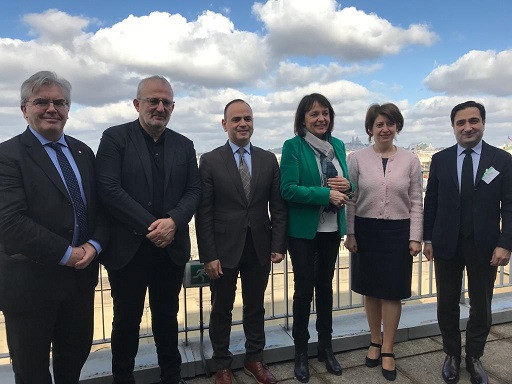 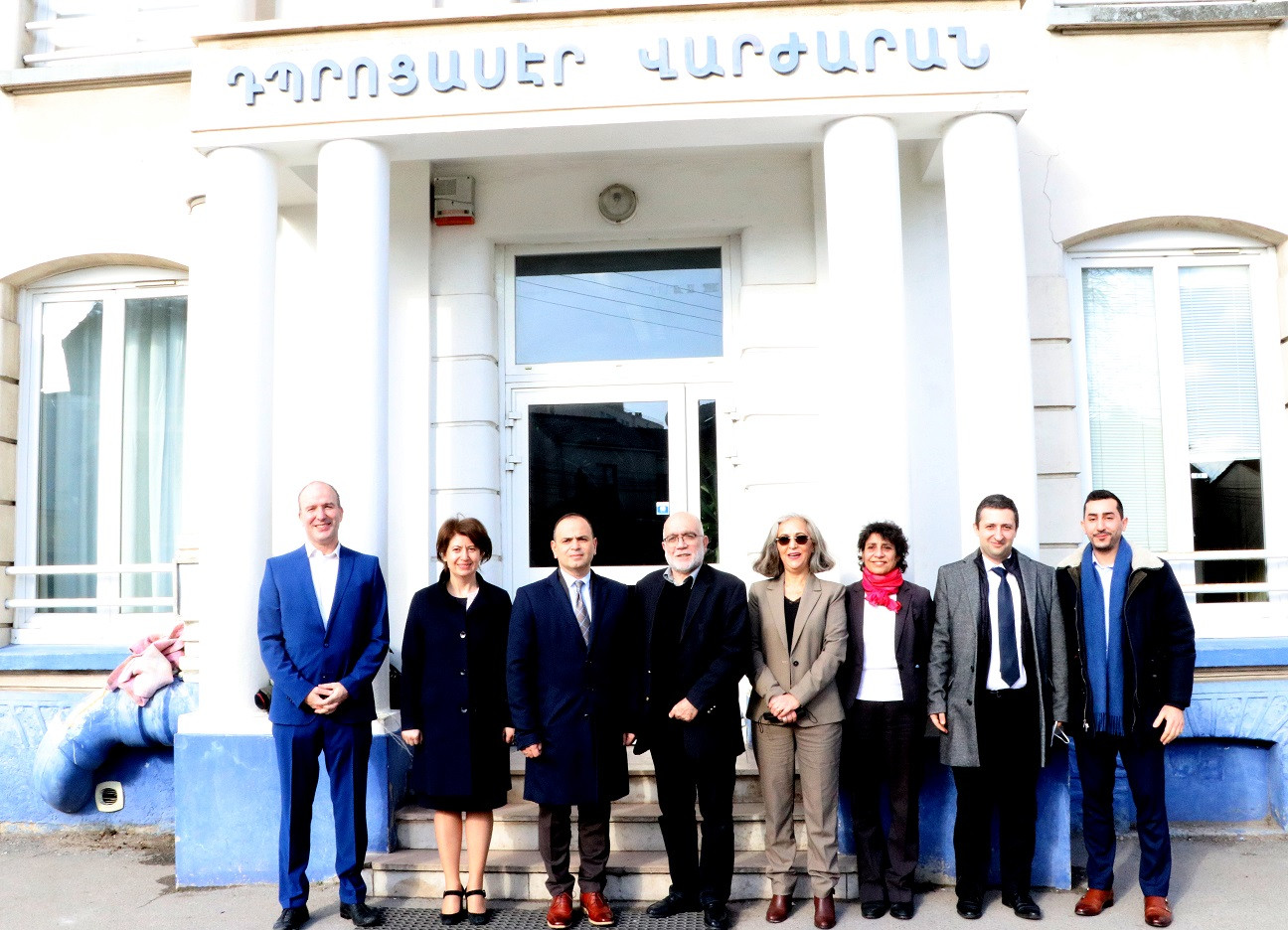 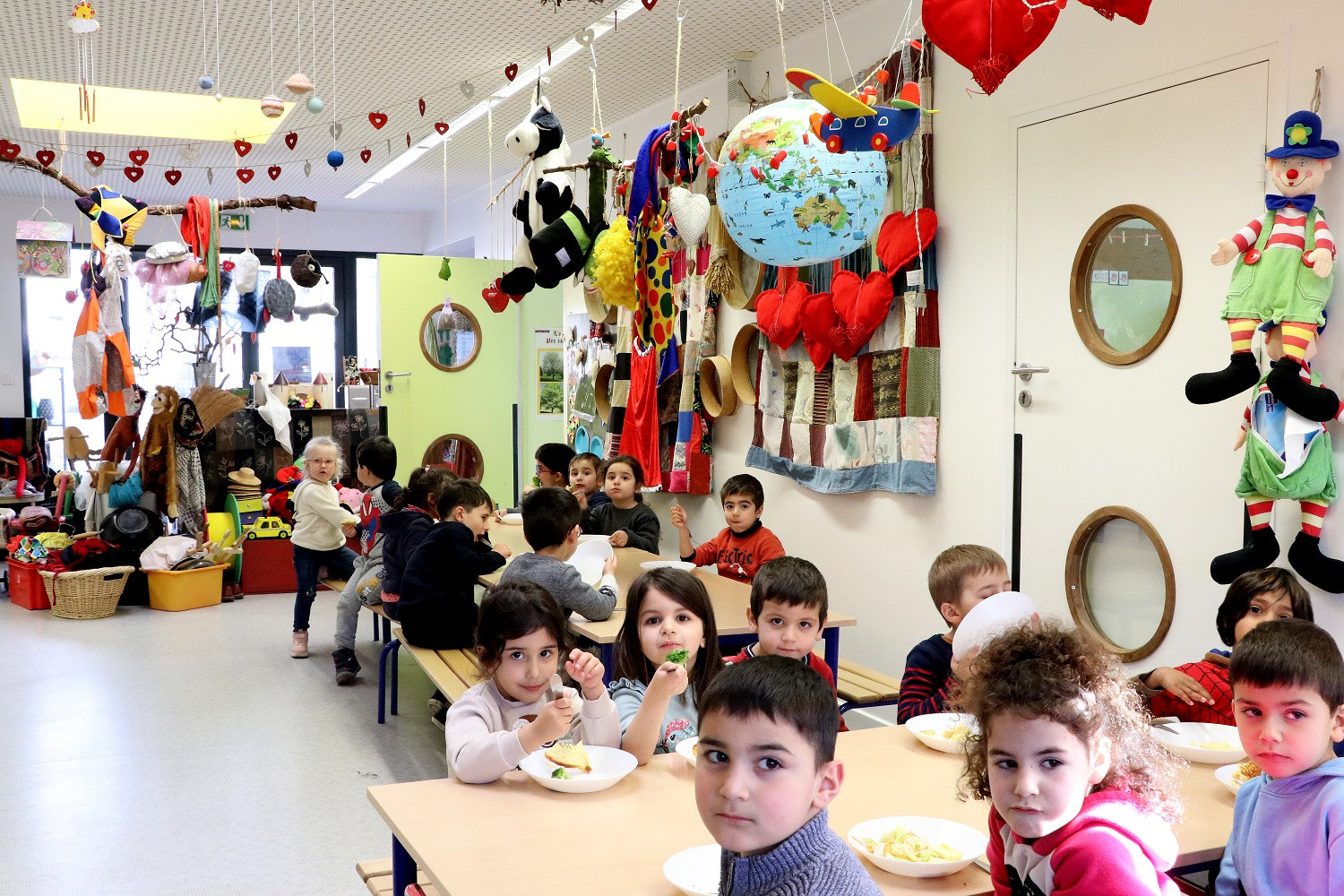 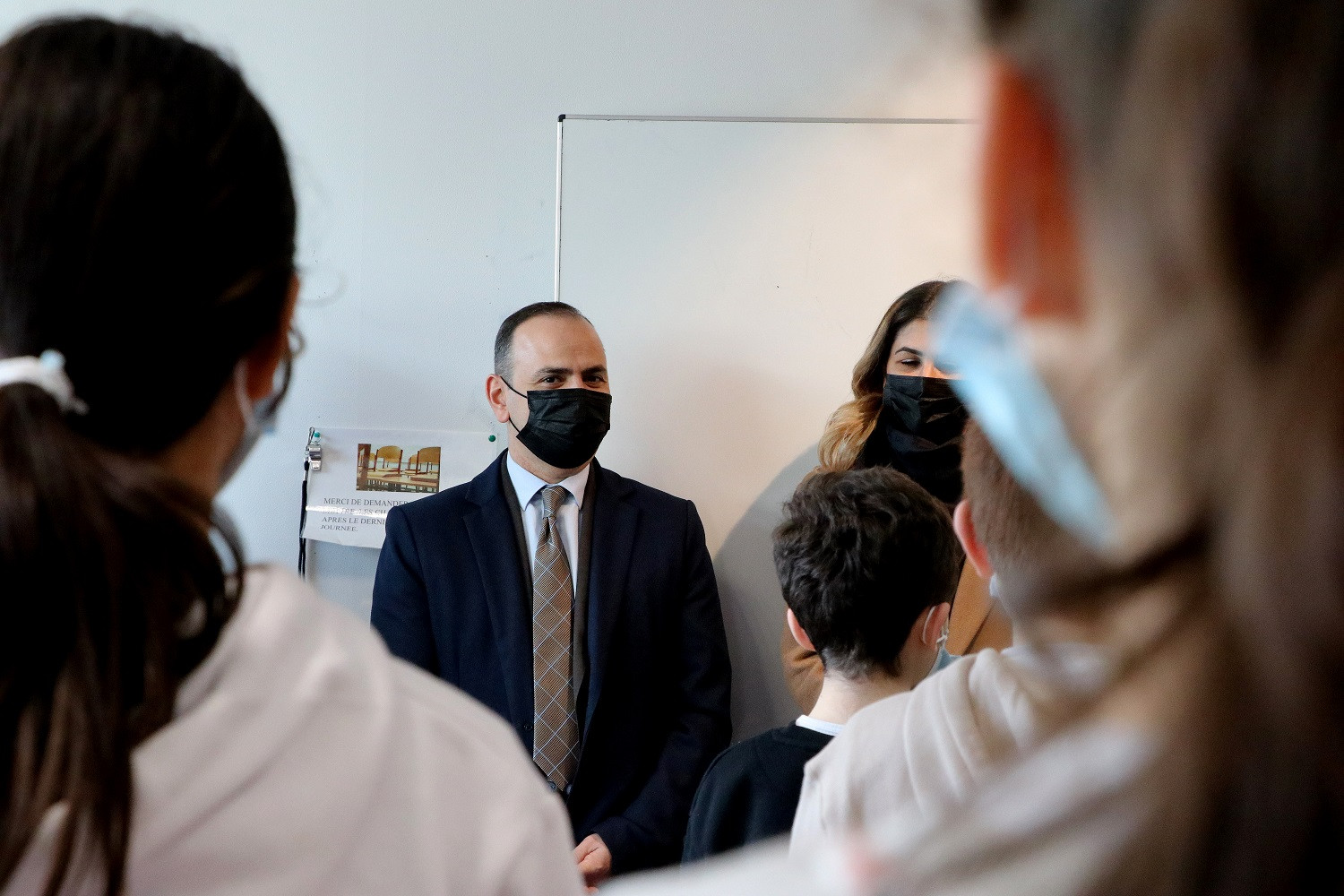 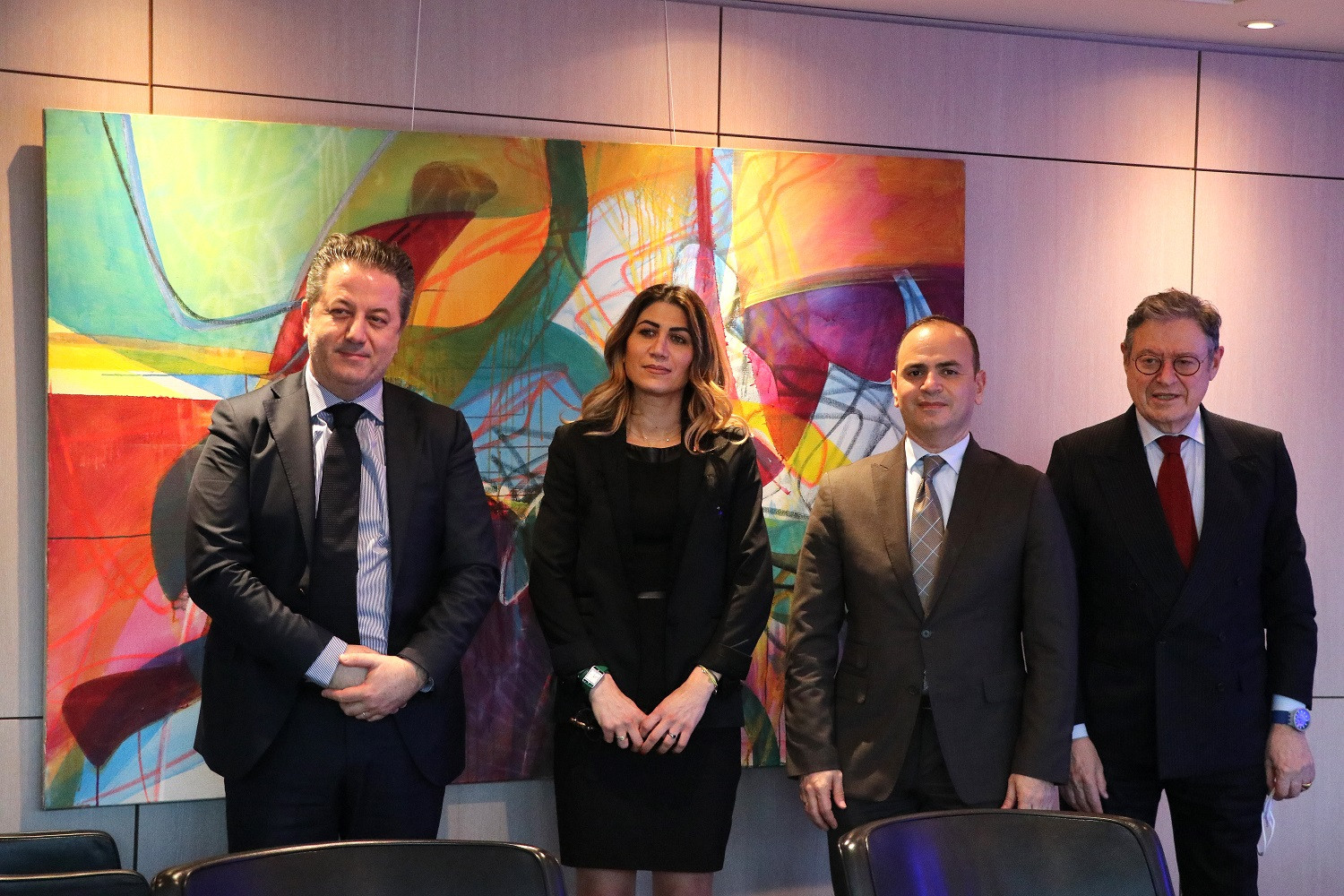 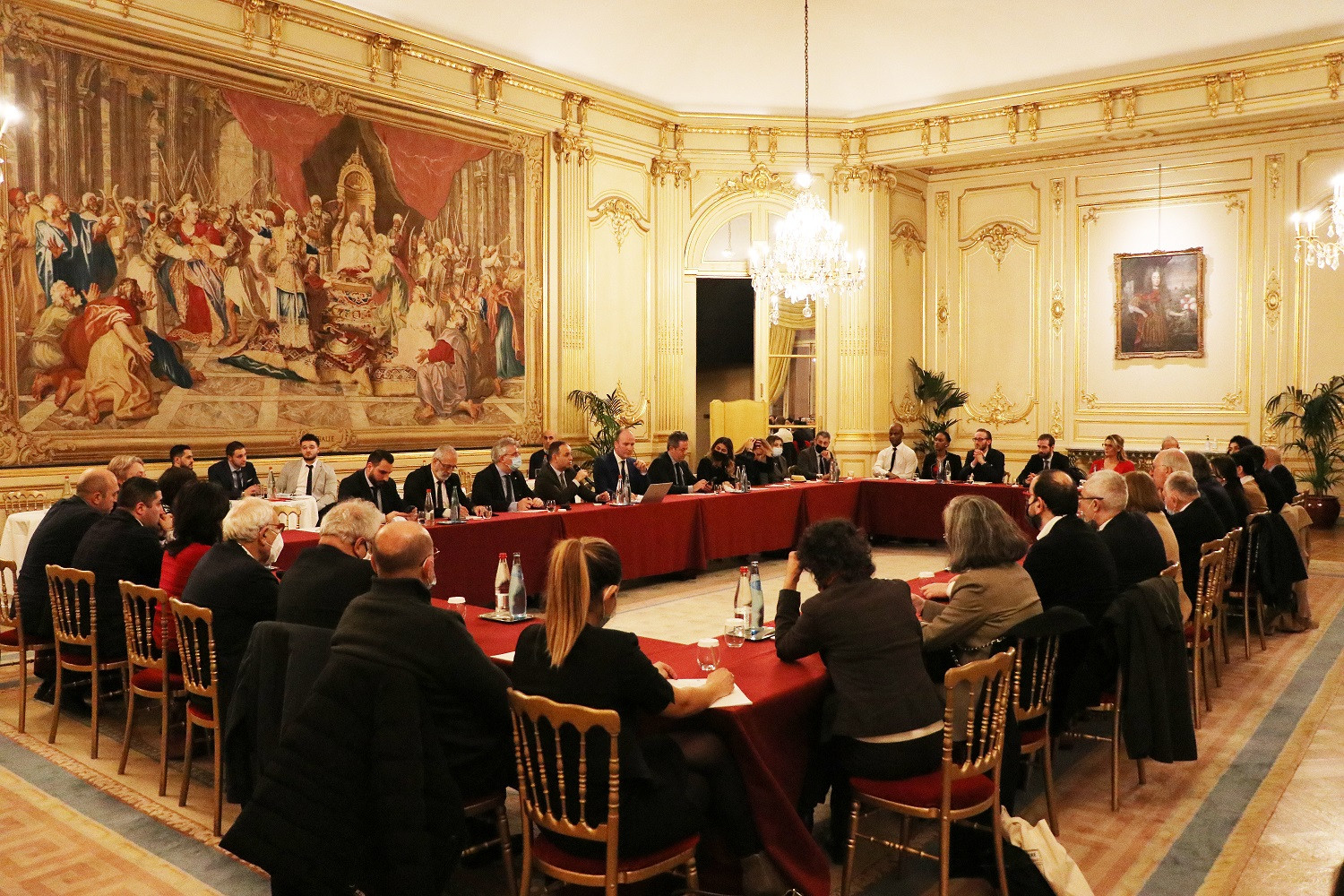 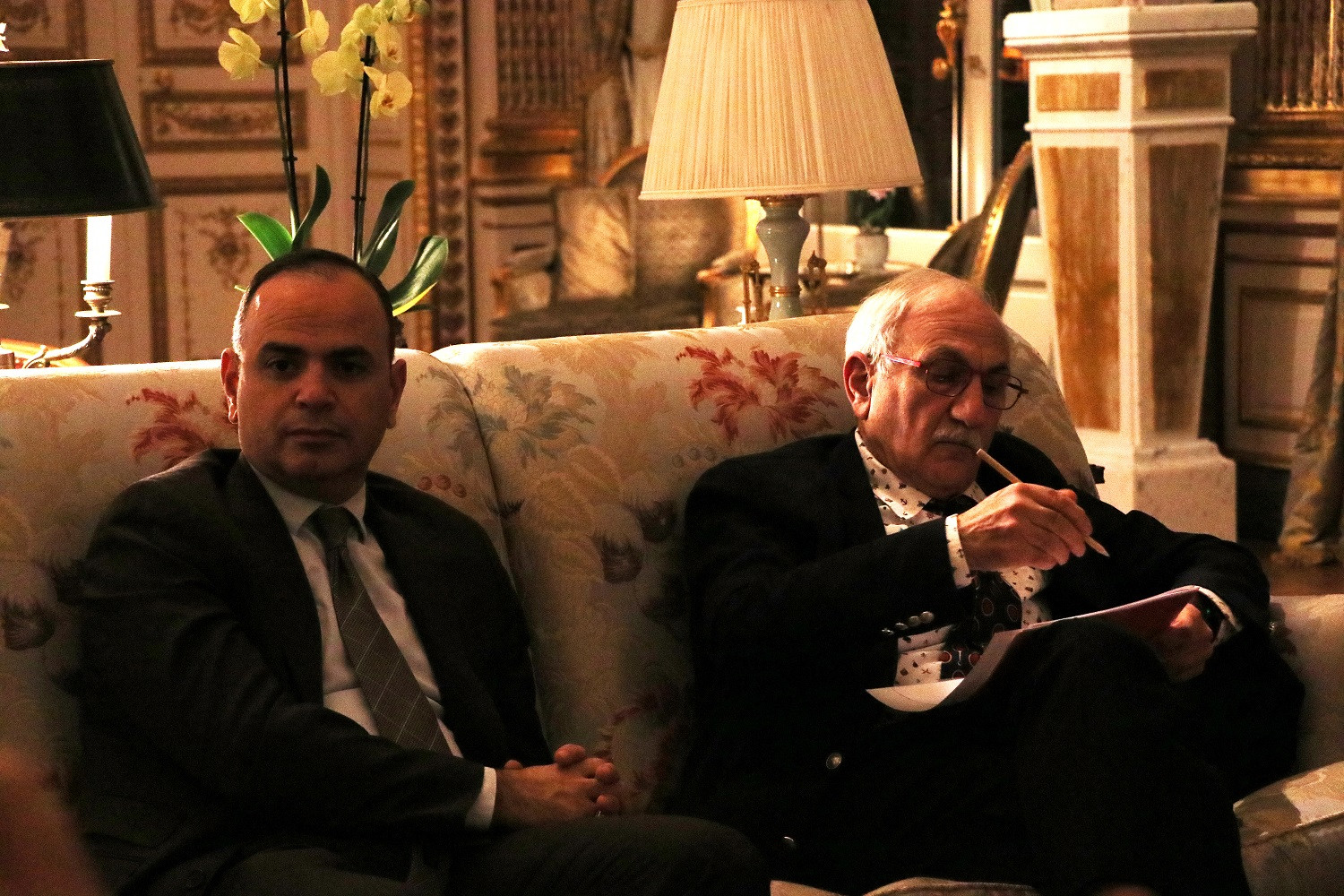 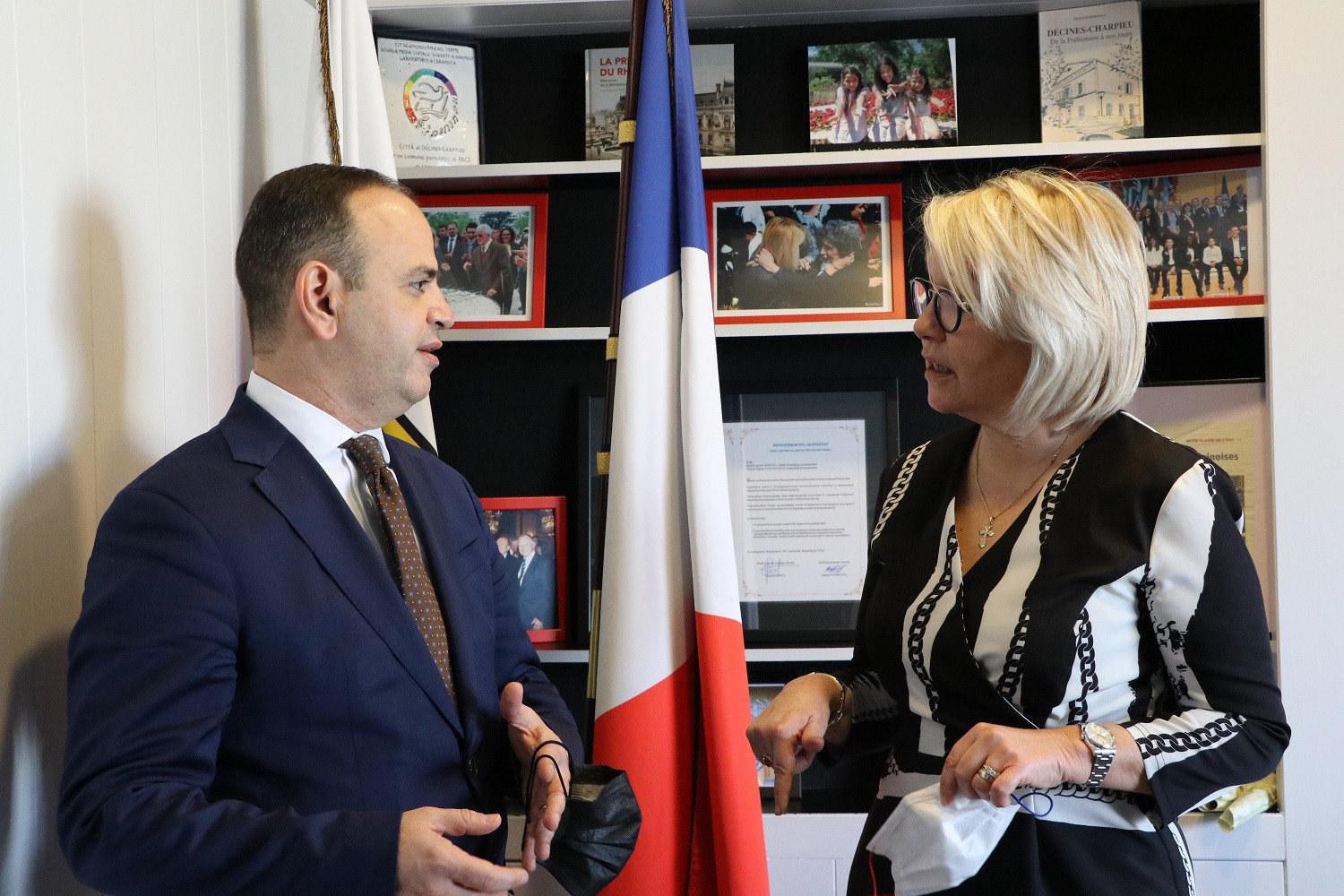 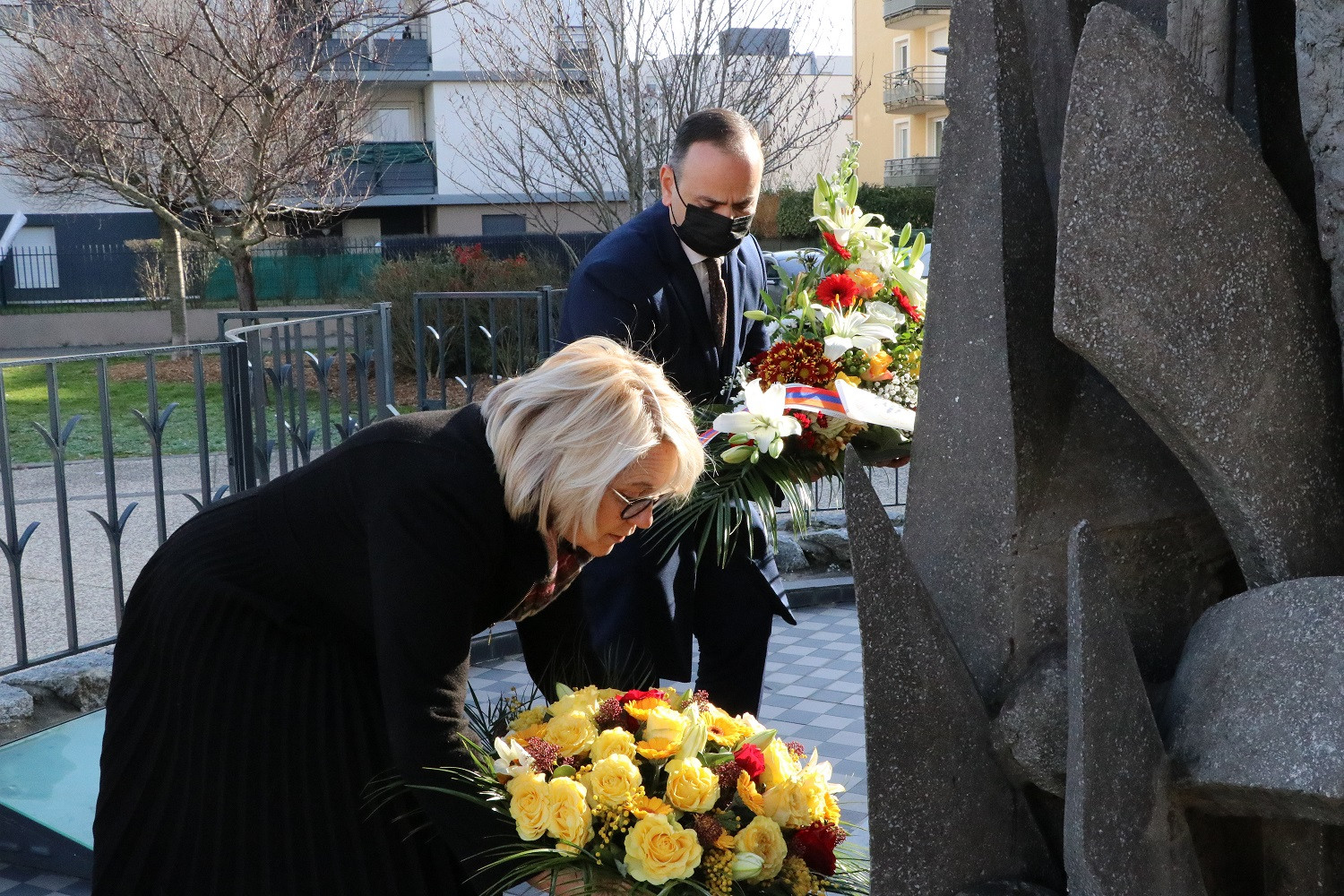 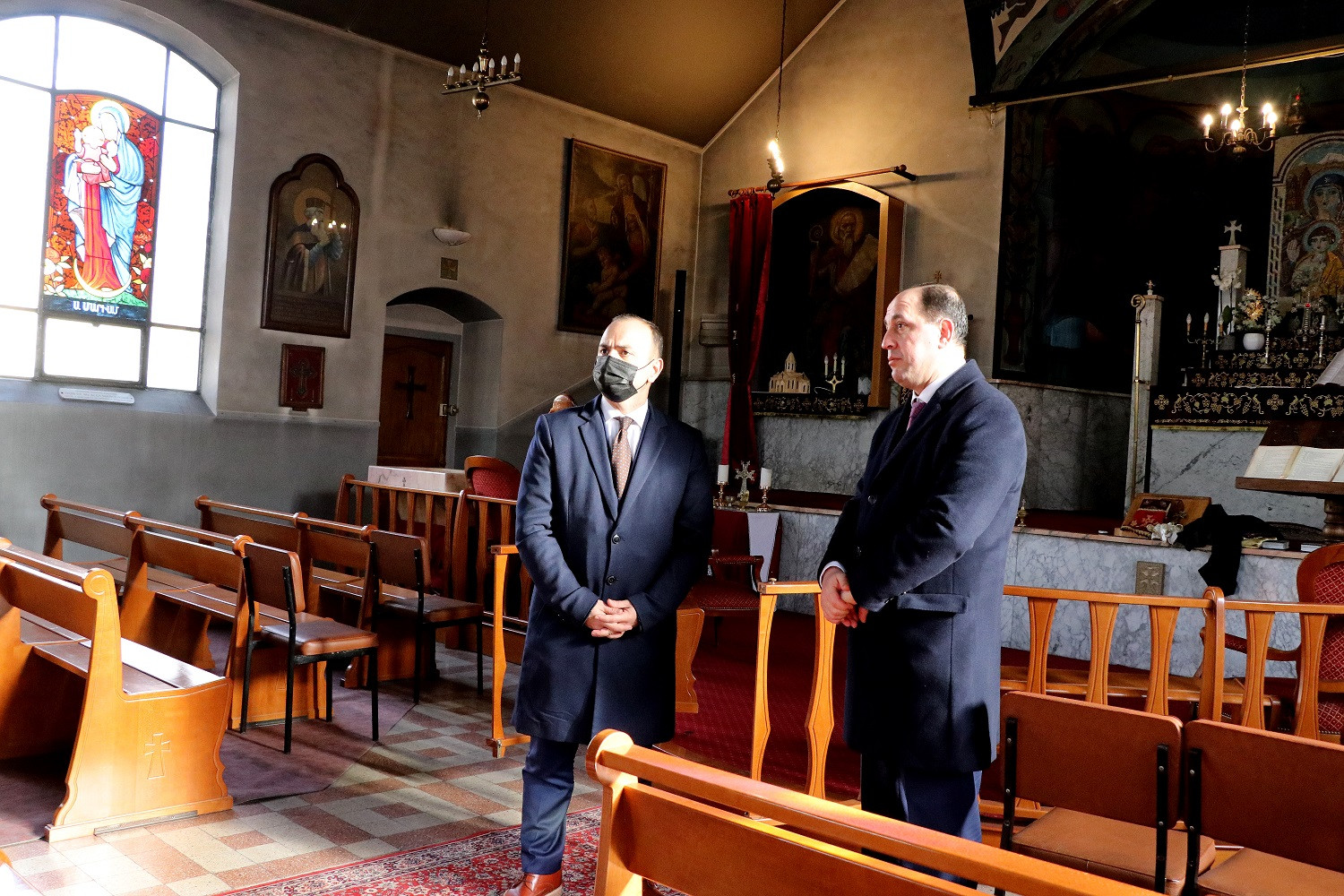 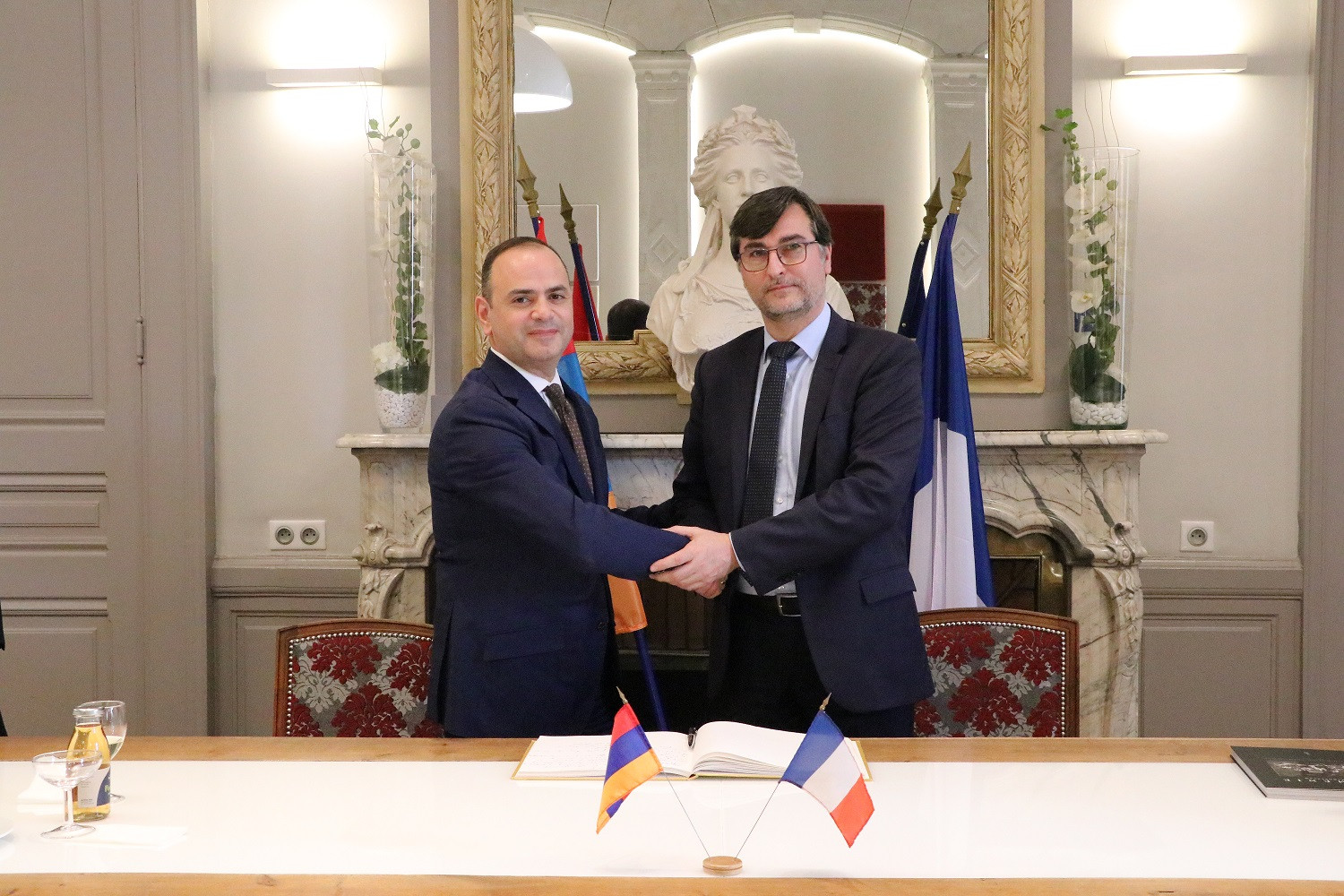 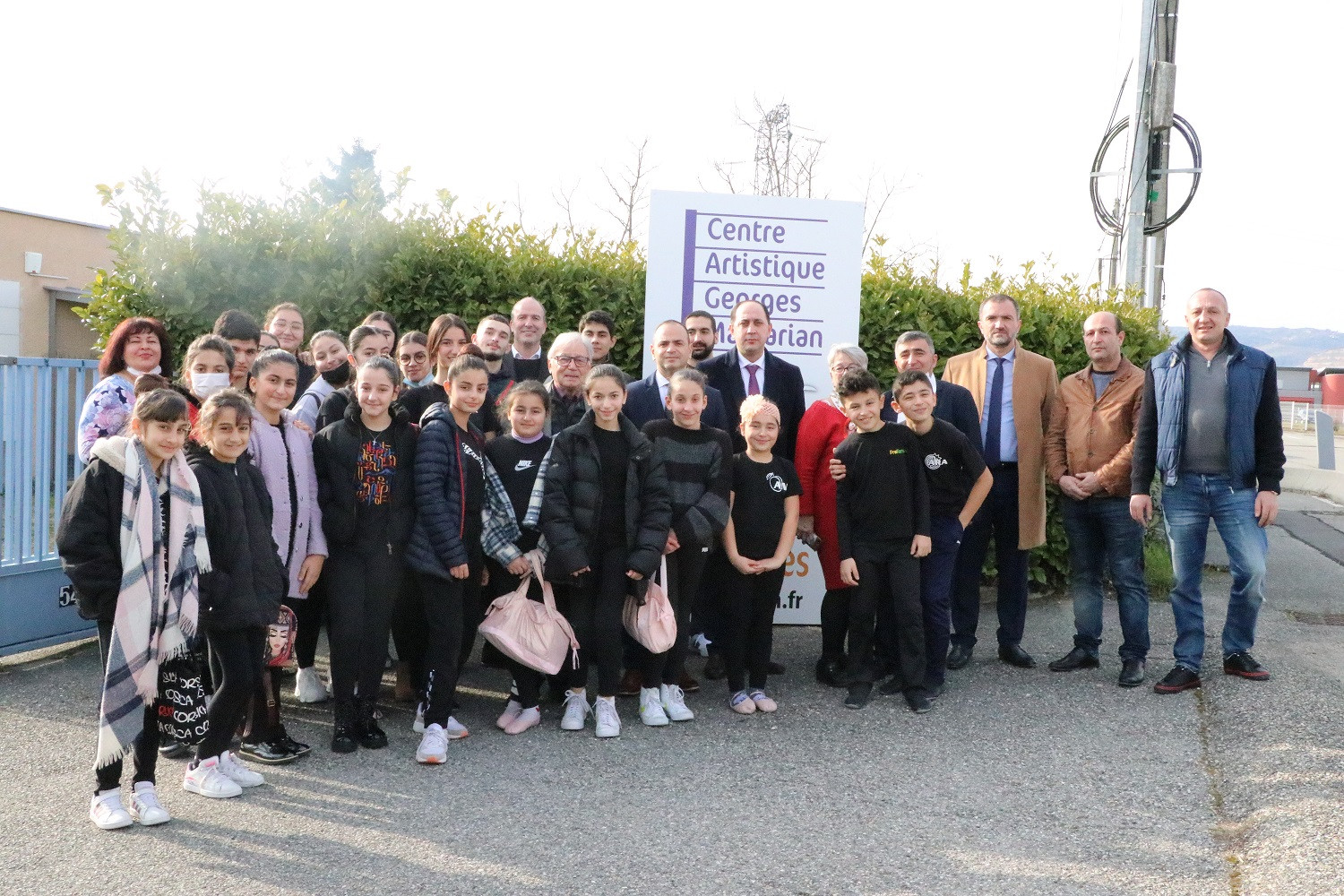 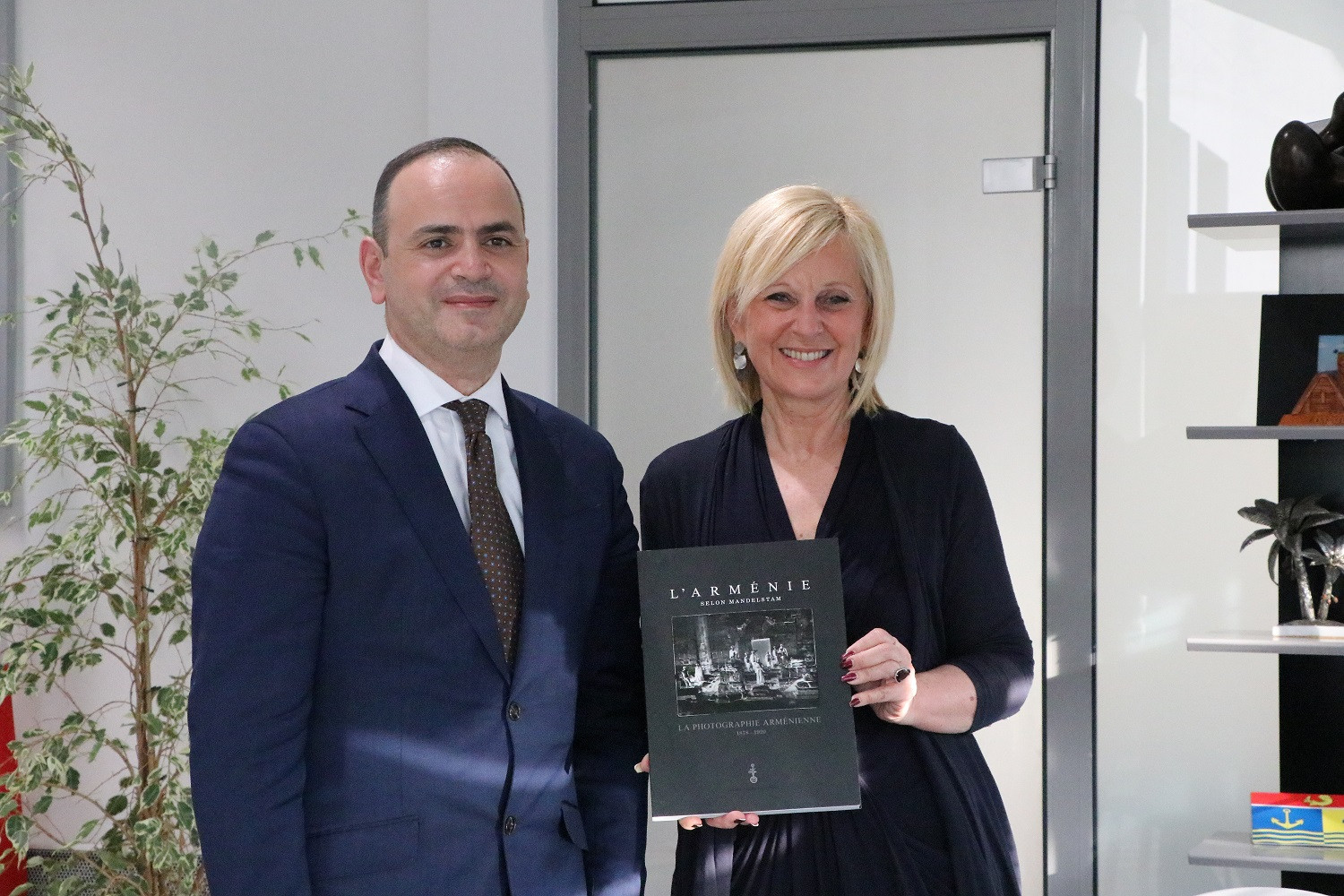 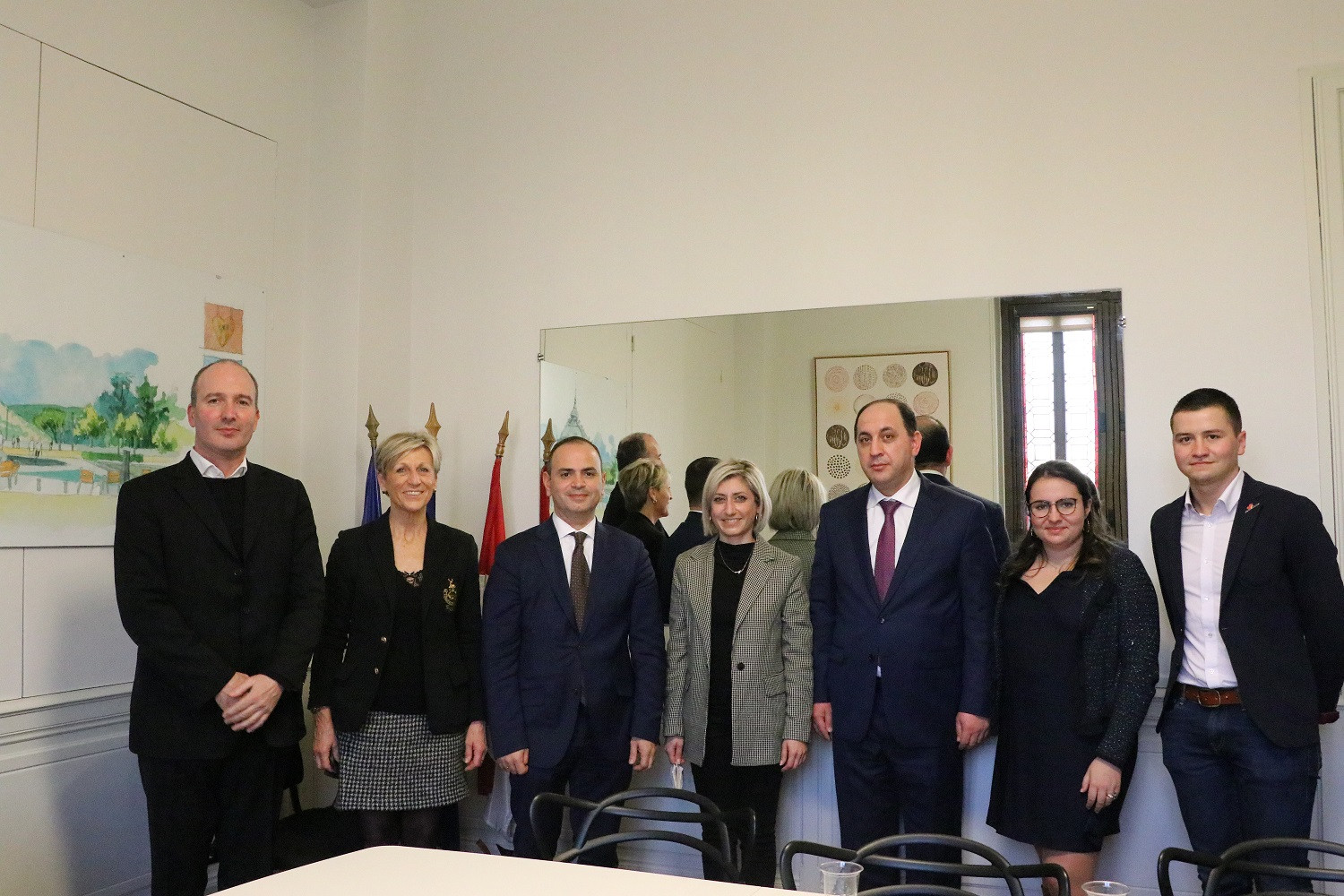 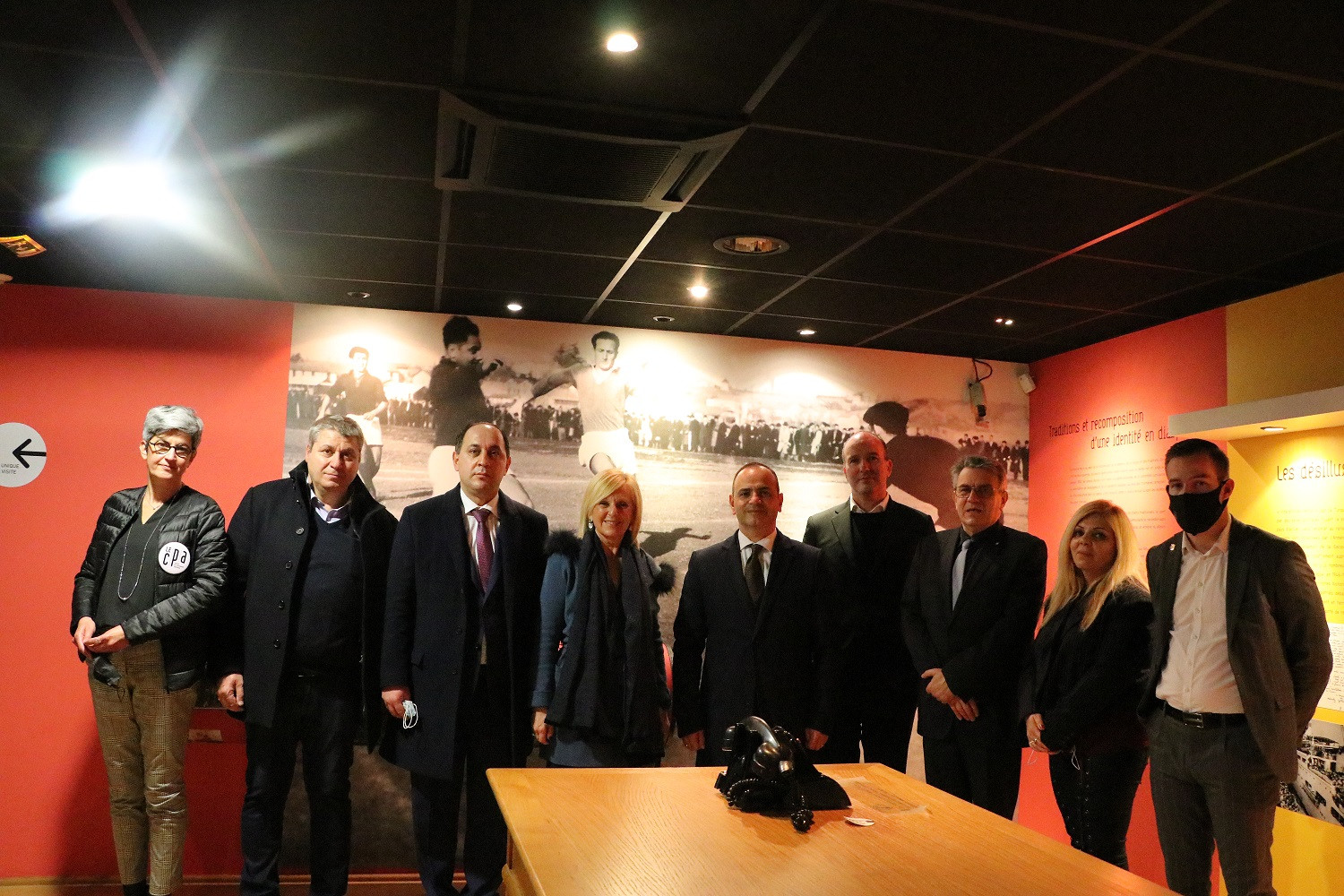 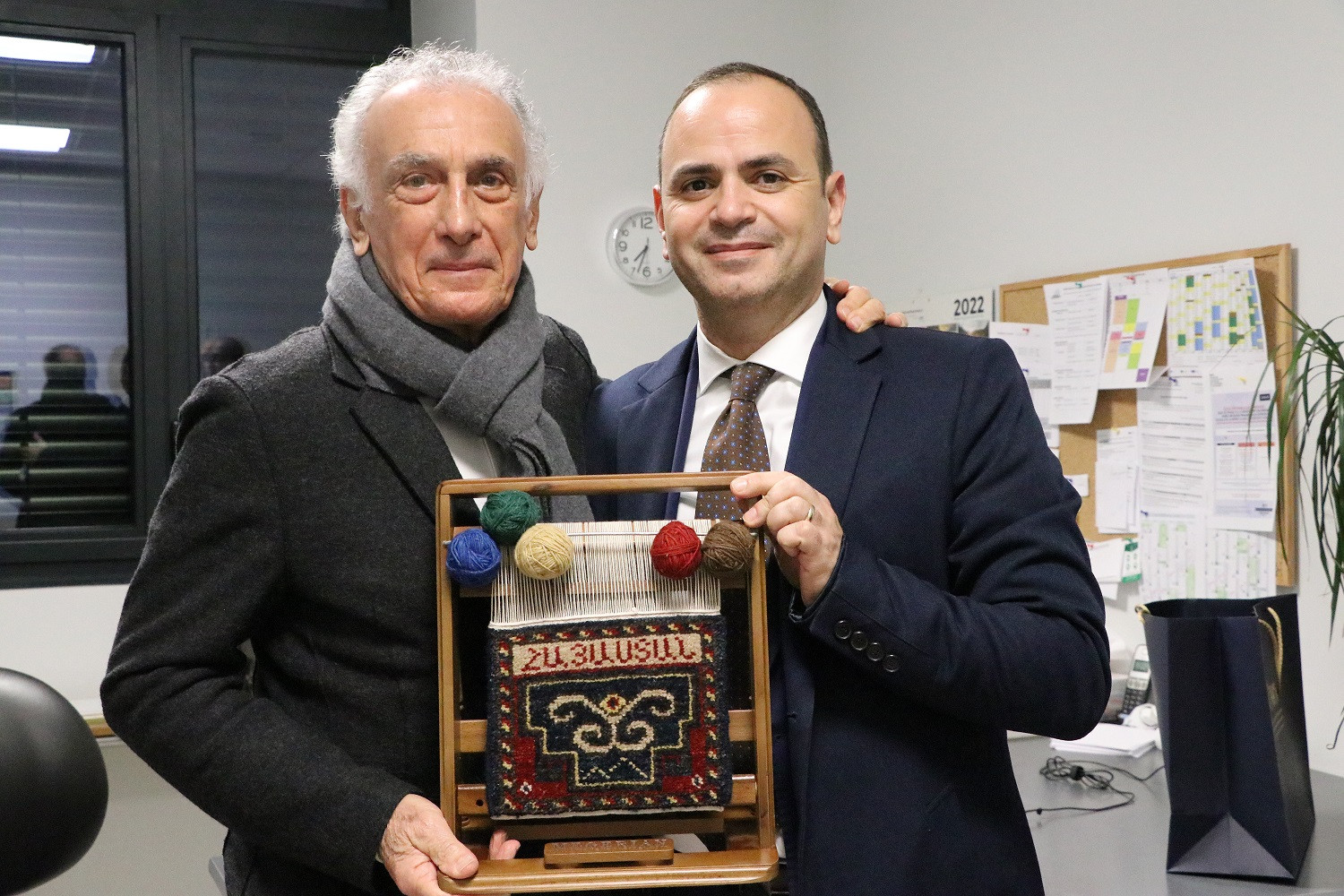 High Commissioner Zareh Sinanyan continued his working trip to France with a visit to Lyon. His first meeting in Lyon was with the Mayor of Décines-Charpieu, Laurence Fautra. “I am glad that we have mayors such as yourself in largely Armenian-populated cities. I am sure that our compatriots feel grateful as French citizens,” said Zareh Sinanyan. Currently, the city is in the process of becoming sister cities with Stepanavan in Armenia, and with ongoing efforts, a TUMO center in Lyon opened in January. "I am a friend of the Armenian people. In another life, I was definitely born an Armenian. Armenians are a progressive people, and this is in their culture and genes. That is why, to some extent, I feel like an Armenian and carry the cross I received as a gift from Yerevan," Laurence Fautra said. She vividly remembered her last visit to Artsakh as well. During the meeting, the Mayor and High Commissioner discussed possibilities for expanding cooperation. Then they laid flowers at the Armenian Genocide victimes memorial, located in the center of the city.

Armenian Vice Consul Levon Davtyan will be present at all meetings in Lyon.

In Vienne, High Commissioner Zareh Sinanyan met with Mayor Thierry Kovacs, Vice-Mayors Levon Sakounts and Hilda Dermidjian, heads of Armenian organizations in the city. The High Commissioner presented the general plan for working with the Diaspora, noting that his visit is introductory and aims to start a meaningful dialogue with Armenians in France. "We are working with the knowledge that the Diaspora can help Armenia in more ways than just economically and philanthropically. On the other hand, we must understand that the Diaspora has its own deeply-rooted issues and they need long-term solutions. I am glad to see that Armenian schools have been opened in France over the past 10 years," the High Commissioner said.

In his speech, Thierry Kovacs noted that Armenians are heavily involved in the city's development.

"This is a great example of integrating in France, as Armenians have become good citizens, but have also preserved their roots. Although I do not have Armenian roots, engaging with the community makes me feel a little Armenian. If we don't help Armenia, our freedoms may be at risk one day," the Mayor said. He also shared the city’s activities with twin city, Goris.

The High Commissioner emphasized the fact that the Mayor of Vienne visited Armenia and saw where the residents of his city come from and why they are the way they are. Then Thierry Kovacs organized a small tour of the city for his guests.

On the same day, the High Commissioner met with Vice-Mayors of Valence Véronique Pugeat and Armenian-born Nathalie Iliozer-Boyer. The Mayor expressed her gratitude for the presence of Armenians in the city. Ten percent of the city's 95,000 residents are Armenians.

The High Commissioner met with the Mayor of Bourg-lès-Valence, Marlène Mourier. "Armenia is going through difficult times, and in these moments, we find out who our friends are. It is encouraging that, despite various difficulties, your city stands beside Artsakh. I felt it from the very first moment I entered the city," the High Commissioner said.

“When you visit Artsakh, it’s unlike any other place you’ve experienced before. I visited and witnessed Armenian Artsakh with my own eyes. During the war, I was constantly in contact with the Mayor of Shushi,” said Marlène Mourier.

Bourg-lès-Valence and Talin are twin cities. The local community actively supported Armenia during the war, which continues to this day.

Then, accompanied by the Mayor, the High Commissioner visited the Armenian Heritage Center, where the history of the Armenian people is compiled.

The first day in Lyon concluded with a visit to the Armenian Academy of Music and Dance of Valence. The High Commissioner met with the founders of the Academy, Mr. and Mrs. Margaryan, and Director Levon Chadigian. Currently, there are 160 students at the academy.

The High Commissioner toured the academy and attended a musical program by the students.

Then, Zareh Sinanyan visited the newly opened Kevork Arabian School in Valence, which has more than 200 Armenian students. The school was founded in accordance with all the criteria of modern approaches to education. The school’s founder is the Co-Chairman of the Armenian Cultural Center of Valence (CCAV), Andre Hasbanian. "Four years ago we started construction of the school, and I promised myself that we should complete it in the next three years," Hasbanian said.

The High Commissioner stressed that the Diaspora remains Armenian as a result of such devoted people.